I haven’t talked much about Quincannon yet except to briefly summarize his actions and connection to Jesse. Here, we learn his backstory, a tragic one in which his entire family dies in a horrifically absurd cable car skiing accident. I’ve expressed my amusement at the location titles in this series before, and they’re especially effective when describing short words that take up the whole screen – in this case, a giant, washed-out VAIL. The comedic timing underpins the humor of the event, even though it is honestly depressing – the guy’s wife, kids, presumably mother, and small daughter all die instantly, and not only that, but their coffins all end up in his massive office, eleven or so of them.

The deaths are a tool, a plot point to turn Quincannon from whoever he was before into the accident into the disillusioned, life-disregarding antagonist we’re familiar with. His motivation is important to understand now especially because since Jesse commanded him to “serve God,” he’s become outright murderous. Now we know why; the god he serves is one he invented – the God of Meat. He sees cattle and humans as the same thing, corporeal and without any metaphysical essence beyond their own bodies, and as the runner of a meat-packing plant, one can imagine how much regard he has for the lives of either. He’s been accruing land throughout the episode and driven by the desire to expand his empire, but now he goes about it with determination, while previously he did it out of apathy.

We see what Jesse saw as a child when his father came to comfort Quincannon: a pile of gore from a cow and his dead daughter, both cut open in the man’s grief-stricken state to prove to Jesse’s father, and himself, that there’s no afterlife, no soul, nothing to separate humans from other animals. Jesse’s father recognizes that Quincannon is too far gone in his thinking to be comforted by religion. Jesse, however, while riding on the delusion of making people’s lives better through Genesis, failed to grasp this, and in trying to force Quincannon to cope with his grief through religion, instead drove the man to adopt his own nihilistic religion.

While not a relatable antagonist, particularly, Quincannon is still a product of the main character’s mistakes, and further than that, a human being we can sympathize with over the loss of his family. The show has a tendency to sympathize or complicate characters from the books. Jesse, Cassidy, Fiore and Deblanc, and even Eugene, despite him having a darker backstory in the show, are all depicted so that the audience can sympathize with their characters and circumstances.

Not all of these changes necessarily work, but Quincannon’s case is probably the best for improving the character from what he was initially. The book character, while somewhat intriguing in presence, boiled down to be such a flat character who was genuinely unpleasant on all fronts – angry, racist, violent, perverted – that he also ended up being forgettable and unnecessary. The show took what worked about the character – the unsettling meat locker scenes where the panels didn’t show what he was doing, the army of meat packing plant men, the control he exerted over the town, and his crazed appearance complete with bottle bottom glasses – and then tossed out what didn’t. The things they added, especially his backstory and disregard for spirituality, allows him to play a more prominent role in the story, and fill the shoes of a main antagonist without feeling forced into the position.

The other emotional turning point in this episode is when Jesse finally digs Eugene up from the ground. Recognizing his mistake, Jesse does everything in his power to begin to set things right, tearing up the floorboards of his church and eventually pulling Eugene out of Hell. The victory lasts for the majority of the episode before he realizes that the Eugene he’s seeing is a figment of his imagination – possibly come about by him inadvertently using his power on himself while trying to call him back.

This Eugene is a manifestation of his guilt, and tags along for most of the episode, pointing out his thoughts and moments when he’s lying to himself. In the graphic novels, John Wayne appears frequently as a figment of Jesse’s imagination who talks with him and gives him advice, later shown to be a means through which Genesis communicates with him. While I’m unsure whether the figment will return eventually, here at least he serves a somewhat similar role to the John Wayne figment, belaying information about Hell and forcing Jesse to confront his inner demons, eventually convincing him to give Genesis up to the angels. It doesn’t work of course; after Fiore and Deblanc return it to the coffee can, Genesis decides it prefers Jesse and breaks out again, this time permanently. The Eugene figment disappears, leaving Jesse to wallow in his regret, but reappears once more in the last episode as a reminder of what Jesse’s done. 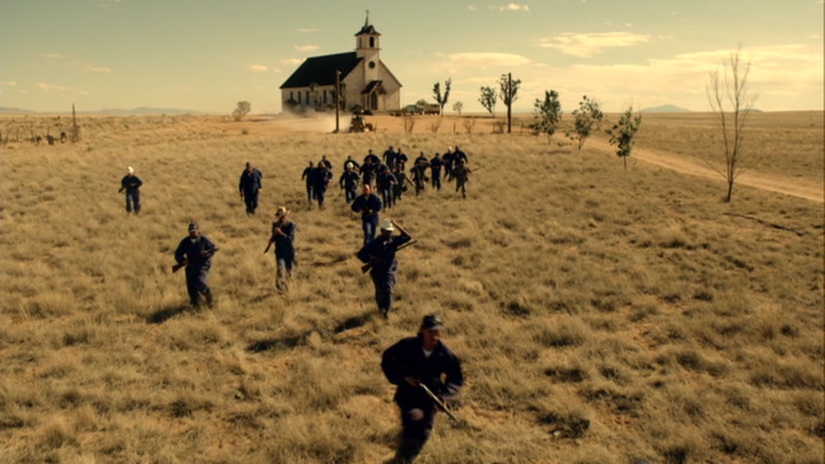 The main set-piece moment of this episode is arguably the largest in the season — the assault on the church with Jesse defending it single-handedly. Unlike other set-piece moments, like the various angel fights and Cassidy getting burned, this one is neither character-building or revelatory about lore and plot elements. We already know that Jesse is capable of holding his ground in a fight, that Quincannon wants to bulldoze the church, and that Donnie is concerned about Jesse’s abilities. The only particularly dramatic moment is when Donnie appears to commit suicide during a lull in the battle, which comes out of nowhere and is later revealed to be him deafening himself so he can confront Jesse directly. While this does reveal something new about Genesis – that it only works for people who can hear it – it’s a minor development and the mystery about what happened to him is short-lived.

The main function of the battle, therefore, must be comedic, and it works very well for that. There are three initial charges, the first of which goes mostly unseen and immediately results in about fifteen men entering the church fully armed, the door closing behind them, scuffling, a few shots being fired, and all fifteen men running back out of the church without any weapons. This arms Jesse for the second assault, in which he kills no one, throws a Molotov cocktail at the bulldozer, and shoots a man’s dick off. The last charge, which is more of a one-man mission by Donnie, results in Jesse’s capture.

One of my major issues with the battle, however amusing it may be, is that it feels like it has no consequences, except perhaps for the guy who’s down one dick. Jesse agrees to sign over his land but gets an extension anyway, and while he’s dragged away in a police cruiser, one can imagine that won’t last long. It’s a fun scene, but you could cut it almost entirely and lose little.

The one major consequence of the fight, aside from Jesse talking to Eugene between charges, is that Quincannon inspires Jesse to come up with a way to find definitive answers. Now that he knows Genesis has come about by accident and the “miracles” he’s been performing are about as divine as his shoelaces, Jesse struggles to mesh this information with the information that God, angels, and Heaven are very much real. Unsatisfied with his current conclusion – that the two facts are incompatible – he declares that he shall bring God personally to his church to explain this and everything else people want to know.