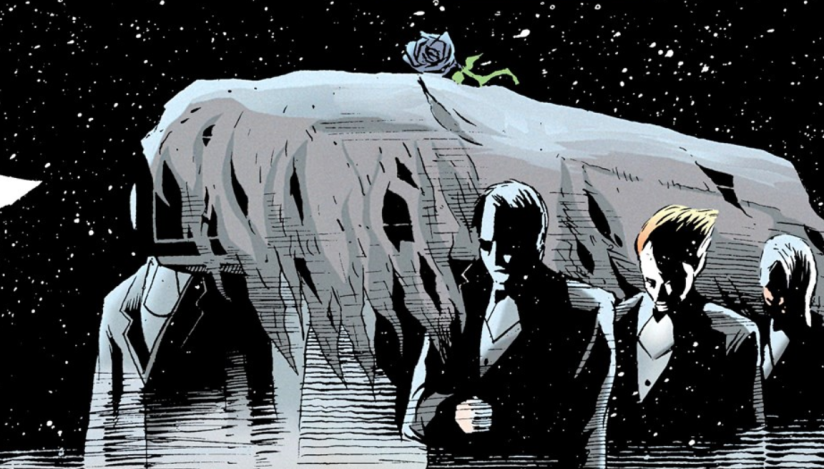 Part One: Seriously, Does No One Else Realize This Guy’s Face is a Pie?

That last book’s ending was a little fucked up. Are you ready to see the rest of Dream’s dramatic transformation into a rational being capable of managing their emotional capacity?

Well, the series sure as fuck isn’t. Here are a bunch of new characters and one old minor character no one cares about sitting around telling random stories that have fuck-all to do with the rest of the goddamn series. Including one about the DC version of Captain America, but as a president instead of a superhero. With a character whose face is a fucking smiley face. And it’s not even remotely comedic.

Can you tell this is the point I halfway gave up with the series?

The short stories have a framing device this time in the way of a tavern at the end of the world. The book opens up with a couple running their car off the road in a storm after a monster steps in their way. They make their way to the one building visible, a tavern at the top of a hill, where they find beings from all manner of realities and worlds have similarly become stranded. Apparently something has happened powerful enough to tear a hole in reality itself, unleashing a universe-spanning storm.

To pass the time, they each tell tales from their respective worlds. There are only five stories in this volume, so I’ll give a brief overview of each of them.

The first story is A Tale of Two Cities in which a man becomes trapped in an alternate version of his city where everything is clean and elegant, but uncanny. He learns that the city is alive and he has wandered into one of its dreams, then eventually wakes up. The illustrations are block-shaded with no outlines and it takes on a slightly different narrative format for its dialogue and narration than most comics.

The second is Cluracan’s Tale, a story which plays off a minor Faerie character introduced in Volume 4 who has appeared a few times since. It’s more tangential than most, with Cluracan being appointed to act as an ambassador to another high fantasy realm, whereupon he is imprisoned. He contacts his sister, who works as Dream’s servant, and Dream agrees to free him. Cluracan then overthrows the corrupt leader of the city. The Faerie characters have a fairly unnecessary role in The Sandman as characters. Cluracan’s sister, Nuala, is an audience lens and an occasional means for the series to demonstrate Dream’s compassion, but she and the other Faerie characters are not given enough room to develop, yet appear too prominently to be side figures.

Hob’s Leviathan tells the story of a girl who disguises herself as a cabin boy and travels on ships all around the world. She tells of one time when a ship she was on briefly encountered a sea dragon and, despite being amazed herself, the crew refused to talk about it. This story is one of the simplest and yet most roundabout and convoluted, amounting to fairly little of anything concrete but eager to tell about its characters in great detail. There’s a somewhat interesting anecdote halfway through where one of the passengers tells a story about an Indian king, but aside from this, the story is overlong and excessively wordy.

The fourth story is The Golden Boy, and it’s easily the worst of all of the Sandman short stories. It tells the story of Prez, a boy destined and determined to become the youngest president of the United States, which he does. He’s excellent at it, and everyone loves him except for those ruled over by a pie-faced man named Boss Smiley. After serving two terms, Prez dies from unknown causes and goes to Heaven, where he learns Boss Smiley is actually God. It has some subtle references to Watchmen by way of a bunch of watches, superheroes, and smiley faces (you know, the three main symbols Watchmen has…) and also plenty of Jesus imagery, Jesus played here in the daring role of a white blond boy. It’s so edgy and insightful. It does give us one of the most oddly-proportioned versions of Dream I can remember seeing, though, so I’ll give the story credit for that.

The last story is Cerements, which is about the city of the dead where all of the funerary rites of every culture are performed.

Cerements is the one story in this compendium I felt merits more exploration. For all I know, maybe there’s an obscure DC comic that does just that. It tells the story of the world of the dead, where the inhabitants, rather than necessarily being dead themselves, devote their lives to preserving and upholding the burial practices of all other worlds.

The story is told from the viewpoint of a school, not unlike an undead Hogwarts, and students studying the various forms of burial. One of the mortician students describes a sky burial he oversaw for one of his classes, a very real practice in which a corpse is dismembered and few to vultures in regions where wood and loose soil are not readily available. It’s graphic, but the story takes care to depict the practice delicately all the same, never making mention of the particular cultures where sky burial is common, but endearing it with at least some amount of respect.

In the aftermath of the burial, the morticians take turns telling stories of their own, all macabre and eerie. One tells a story of a doomed hangman who outruns his fate. Another tells the story of his encounter with Destruction as Destruction wanders the universe. The last tells of a girl who once stumbled upon a strange chamber with a book and six shrouds — a chamber we learn in the tenth book is for the funerary practices of the Endless themselves.

The beings inhabited by this morbid world are surprisingly lively despite their frightening appearances. I like the Gothic atmosphere and the atmosphere of the school, and the story itself is complex without being boring. It foreshadows events in the next book, and the narratives within it all connect more directly than any of the short story chapters in this book do to one another. It isn’t completely necessary, but it’s a small comfort in a much less necessary volume.

Part Three: Who’s in the Box?

As you know by now, I’m not overly fond of the Sandman short stories. I find them often too wordy and self-aggrandizing with little substance to back up their boisterous affect. I realize my reading of these stories is often fairly shallow and that they draw from broader references that I may be unaware of, but I consider complaints about pacing and comprehension tollways in stories to be valid. There is no “incorrect” way to interpret a story, only an incorrect way to describe a perspective in which it is viewed. As long as you know where you’re coming from, and what your biases and limitations are, who’s to say your feelings about the story are insincere?

This is an unnecessary book, made more unnecessary by several relatively weak stories within it. However, the placement of the story is somewhat important, and the framing device makes me hesitant to say it could be read, as the other short story collections are, outside of the main narrative. The framing device is directly dependent on the actions of the ninth book, which, while still vague here, are foreshadowed by the eight volume’s ending.

The characters brought together by an unknown trans-dimensional force look into the sky and see a funeral procession of giant celestial pallbearers. The pallbearers are of course the Endless, but, shocker, Destruction and Dream are nowhere to be seen, implying one of them is in the box.

Let’s see if we can guess which one it is, shall we? Well, Destruction left for lands unknown and basically gave up his godhood, plus he appeared in the ominous Cerements chapter. That’s a tick in his favor.

Then again, there aren’t many characters in this series who are so melodramatic that they would actively plan their own tragic downfall and watch their whole life’s work temporarily crumble to pieces because they’re too sad, and fewer still who would do so because they’re distraught by their own inability to interact with other beings and fail to cope with something that most people over the age of seven could understand. Do we know anyone who might, say, opt to “die” and invite literally every fucking person they’ve ever interacted with to the funeral, and make their family cry and say nice things about them while they watch on the goddamn balcony of their ivory mansion because they can’t actually fucking die and everyone knows it?

Spoiler alert, it’s not Destruction hiding in the box.