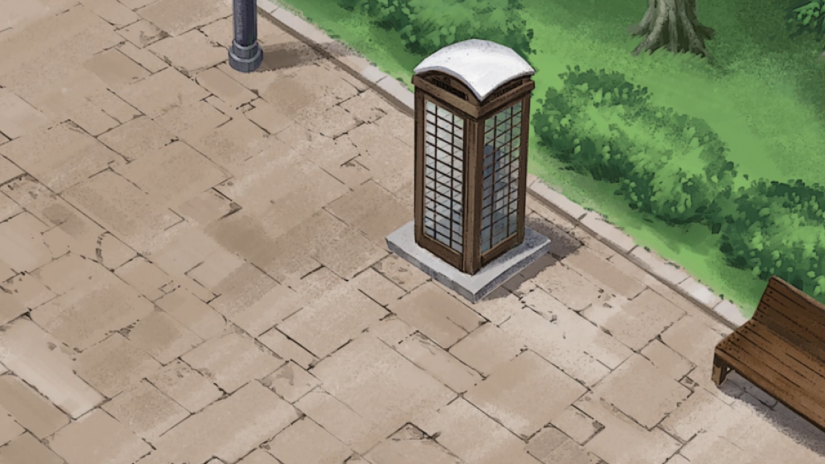 Episode Two: Footsteps of a Comrade-in-Arms – **

We focus here on the grander scheme going on in the military ranks and Mustang’s attempt to continue Hughes’ work. There’s something rotten going on and even the Xingese visitors know it. Of course, with Ed and Al back in Central with Winry and Mustang’s crew, and Ling’s team exploring the city in secret, one might expect the characters to run into each other, and that’s largely the direction the episode takes after its halfway point.

To an unsubtle degree, actually. But more on that later.

The episode doesn’t really come to a climax of any sort regarding the homunculi plot, though it does set pieces in place for the next few episodes. The audience knows Bradley is a homunculus, and that the others — specifically Envy, Gluttony, and Lust — are hanging around scheming. What their goal is remains to be seen. If Greed is any indication, they all have distinct drives and personalities, but their actions indicate they work as a unit under the orders of Father. Lust is working undercover with one of Mustang’s men while Envy uses his shapeshifting abilities to trace Mustang’s actions. This seems to be building to something as the homunculi indicate an interest in distracting Mustang by offering him a scapegoat — Maria Ross, one of the low-level officers previously assigned to look after Ed and Al.

Of course, we’ll have to wait for the next episode to see much development in this plot line. Mustang spends the episode following Hughes’ paper trail to figure out what he saw that got him killed (smart move, I’m sure), before getting distracted by the arrival of the Elrics. He has Barry the Chopper in custody for unclear reasons — perhaps because he wants information or simply to keep Barry off the streets — and one of his men looking after the murderous suit of armor. All of this is meant to set the tension for a future cascade in which Mustang’s plotting falls down around him. Given the show’s fondness for Mustang, though, I think it’s safe to say he’ll be fine.

The emotional core of the episode is naturally Ed and Al learning about Hughes’ fate, which Mustang unhelpfully tries to shield from them for all of about five minutes before Ross spills the beans. I think the episode frames this so that Ed has reason to mistrust Mustang for future episodes, building on their antagonistic dynamic, but it comes across as unnecessarily contrived. There might be something in Mustang trying to keep them naive for the moment — he’s occasionally been characterized as secretly sentimental and the episode does a good job of showing how he himself is still struggling to deal with the news. However, the delivery of the scene leaves something to be desired; Ed and Al accept Mustang’s obvious lie without suspicion, and learn the news almost as soon as they leave the building. Actually, they don’t even make it out the front gate.

Bringing Winry along, she naturally goes to buy ingredients to make Mrs. Hughes’ apple pie, and figures out what’s happened as soon as she arrives at the apartment. I understand what the episode is trying to go for in the shocked reactions of the characters, especially given the time they’ve spent oblivious. I can’t help but feel the setup for this moment was far too blatantly telecast in the episode where Hughes died, however. The show went out of its way to make sure we knew the characters were thinking of Hughes in the hours after he died, and them finding out is weakened by that additional clarification. What would have been so wrong with waiting just a bit, letting the characters reference Hughes while away from Central so that the audience had a reminder that they were unaware of the news? Or leaving their lack of awareness to be an unpleasant surprise in this episode?

Again, the series’ lack of patience is something of a curse. This continues into the scene where Ed and Al apologize to Mrs. Hughes for their involvement. I appreciate their guilt in the matter, as they were the ones who sent Hughes down the rabbit trail of information that led to his assassination. My main problem with the scene is its length and Mrs. Hughes’ reaction. Her optimism is admirable, but it feels like it’s mainly there for the sake of the Elrics, which detracts from what little character she has. I think the boys needed more time to soak in the news before apologizing. Maybe given them something different to talk about to ease into the conversation. People often deal with grief from the periphery, especially when it compounds other stresses like taking care of children.

I come away from this episode without many thoughts, to be completely frank. It’s a middling episode meant to connect to a longer narrative. That’s about it.

One thing I would like to praise, though, is the style. While the narrative and especially the dialogue still struggles to push the confines of anime commercialization (which I tend to attribute to the lack of nuance in the series), the visuals are actually quite nice. The episode incorporates effective use of shadows and expressions, which is rare even for this series. The shot of Mustang staring at his own reflection is especially haunting, because in that moment, you feel the weight of everything the character is unwilling to express otherwise. That’s decent visual storytelling there. And the episode is full of it.

The general color palate and shading, especially of the backgrounds, is also nice. This series has always had a good look to it — detailed enough to be impressive, but simple enough to avoid the hectic designs of other combat-focused fantasy animes. The color palate, which is full of bright greens and blues thanks to plenty of outdoor shots in the country and parks, contributes heavily to the look of the series. I quite like it, and this episode knows how to use the background illustrations to great effect.

Ultimately, the impact of this episode falls on the moments. interactions between the characters are fine, as are the devastated responses of the Elrics and Winry to Hughes’ death, at least until the flashbacks go on for too long. Mustang holds the episode together, being the closest to Hughes and given legitimate reason to mourn for him as he does. There’s something to the idea that Ed and Al come to terms with Hughes’ death as children do, though I think this is undermined by the way the plot tries to meddle in the characters’ responses.

For instance, the way Winry’s grief rapidly manifests as concern for Ed and romantic attachment. Just… what? This sort of thing can happen, but the sped, the lack of explanation, and the general execution of the scene where she all but professes her love makes me wonder why the show felt the need to remind us that Winry is Ed’s love interest. Bad timing, concern for Ed’s wellbeing be damned. Winry’s attraction to Ed has been established elsewhere, and while I don’t like it, it’s not going away. Why confuse the emotions of the characters by bringing in this unrelated plot thread to steal attention away from Hughes, though? It would seem prudent to settle the connection here in silence and develop it further on. Ah well.