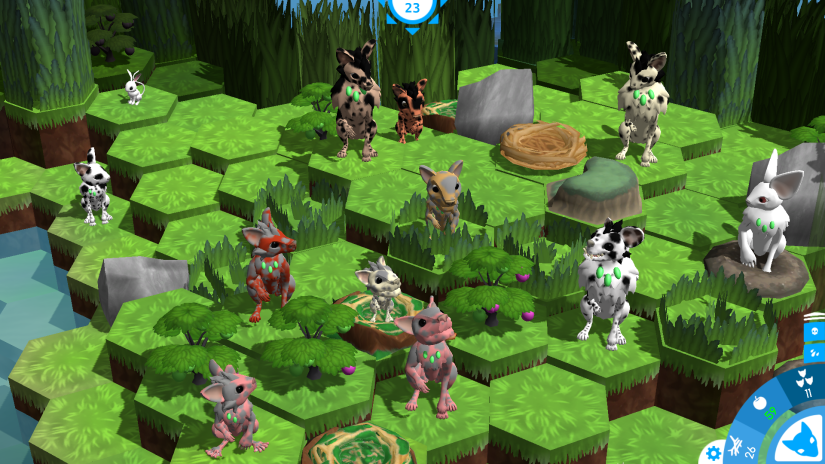 Part One: It is What it Says it is

Rarely do I find a game that is truly innovative in its concept and gameplay. On the infrequent occasion when I do find a game like that, rarely is it as streamlined as this one. Niche: A Genetics Survival Game is a turn-based strategy game that pits the player against the environment, giving them control over a group of critters whose actions they can choose.

The main goal is to secure enough food to get through each day, which is done by exploring the environment and making use of the adaptations of the creatures. The genetic component is incorporated through those adaptations; there are a number of physical traits that increase a creature’s ability to accomplish certain tasks, but any individual can only have a few. One type of foot makes them better at digging, another better at fishing, or gathering, and so on. Breeding the creatures rolls the dice on their inherited traits through a complex genetics simulation, resulting in a baby with a mix of characteristics that, if selected carefully, will help it survive.

The key that makes Niche more than just a breeding simulation is that the creatures have limited lifespans and collect food as a group. Rather than determine the survival of any one creature, the game encourages players to maintain a true population so that they can cover more ground and make better use of the resources in their environment. The genetics of the population come into play here, as well, with greater diversity allowing for individuals to specialize, making better use of scant resources and helping the population overcome threats like food shortages, predators, and harsh conditions.

The interplay of the environment and gene pool puts limits on the sustainable population size for the creatures, preventing you from just breeding until you come up with a creature that has optimum traits for any one task. By selectively breeding and situating your creatures, you can expand the available niche space, and by extension, your population size. The larger you can make the population without overexerting and risking starvation, the more of the island you can explore and the more the game opens up.

Part Two: Let’s Maybe Not Send the Critter with Hemophilia into Battle 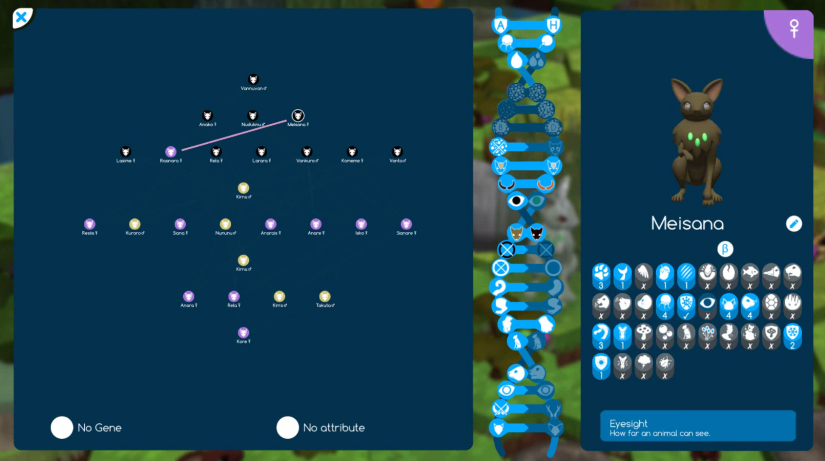 The simplicity of Niche is core to its depth. The game’s learning curve is smooth as butter, adjusting to the player’s input through few means other than the natural patterns that arise in their actions. There are features that push a player to shake up their strategy, like the bearenas that appear from time to time and attack your critters, but it’s not difficult to maintain a small initial population in the starting area. It’s a survival game, but food replenishes rapidly and it’s the only regularly decreasing stat other than a creature’s lifespan. The opening area is highly forgiving, but because of this, grows boring once a player masters the basics. There aren’t any goals per se, but the allure of exploration quickly drives players to push beyond the opening area at their own pace.

The game is not endlessly expansive. There are a limited number of creatures to interact with, and a limited number of biomes. The developers can and have updated the game to include more content, but even with only a handful of environments and objects to interact with, each new element complicates the game. The predators are an obvious challenge, injuring your critters and lowering their lifespans or even killing them, but even new food items or environmental structures offer complexity. The grid-like structure of the game map and the limited number of moves each creature has means that objects can easily get in the way, especially when you’re working with a large population. New food items may require particular traits for a creature to use them, and some valuable resources can be dangerous as well.

More than anything, this is a strategy game. Each new element a player encounters becomes a tool that the player must consider and decide how to use. The game expands gradually through exploration, but also through random events like weather, diseases, and encounters with other creatures. A wild critter wandering around can introduce a new gene set into your pool, but you’ll need to decide if your population can support another adult or if you’re willing to let them wander around and possibly eat the food you depend on.

Add to the actions of the creatures their genetic components and physical traits, and you can see why the game needed to be turn-based. Some genetic traits, like blindness or hemophilia, don’t affect an animal unless certain conditions are met, like if it’s too far from other creatures or if it gets injured. Other genetic traits will lead to diseases that have an immediate effect on the animal. The player has to keep these in mind when breeding and organizing their creatures. Animals with genetic diseases can still collect food, and if their other traits are valuable, it may be worth breeding them to keep that diversity within the population. However, they often need special care, like ensuring that animals prone to sickness aren’t kept too close to those they could contaminate, or that blind critters stay where the group can serve as their eyes.

Once the player is comfortable with their setup, they can explore new biomes and work toward unlocking rare genes to further expand their toolbox and find new ways to interact with the environment.

Part Three: Educational Games Can Be Fun, You Guys

This game has flaws, to be sure. Without much guidance outside of the tutorial, you’re heavily reliant on the descriptions of the genes or available actions, and these are usually vague. A few have spelling or grammatical errors as well, which don’t impact the play experience much but certainly take away from the polish of the game.

Which is a shame, because otherwise, this game is very polished. Even in Early Access, it was a top-notch experience, improved largely through simplification of its UI. You can play the game with minimal UI, interacting only with each creature and the immediate spaces around it, most of which will have one to three available actions on it. However, the small buttons in the corners of the screen reveal a wealth of useful information, including stats for a given creature, its genotype and phenotype, how its phenotype influences its stats, and additional options to improve the play experience. The button in the bottom right-hand corner switches the overlay from sight to smell to sound, influenced by all of the creatures’ abilities, which allows you to detect food and danger out of sight. You can see the history of your group of creatures, as well as that of individuals, their current status, and more. All of this is delivered in a visually pleasing minimalist aesthetic that can be greatly expanded upon when needed.

I can imagine it might take someone a while to fully master the game — I know I’m nowhere close — but Niche is an elegant demonstration of a game that knows its core mechanic and how to deliver it. I picked it up for fun as an interesting strategy-survival game, but its function as a population simulator is probably what I find most exciting about it. While the game isn’t wholly scientific, allowing you to unlock new rare genes by finding items in higher levels, and increasing the chance of a specific mutation at will, I can’t help but wonder if someone could use this or a game like it to teach the basics of genetics to a class.

Typical breeding simulators, like what someone might find on collectible creature sites, are often just big Punnett Squares, and while useful, it can be difficult to use those to practically show how genes work. Incorporating diseases and adaptations into the genes and showing how those interact with an environment is far more interesting and realistic.

Niche also does something particularly impressive for a video game — it demonstrates the many fallacies in racist concepts like eugenics and Social Darwinism. While certain traits in the game are more valuable than others, a lot of the seemingly less desirable traits come coupled with genes that are very useful. As a survival game, it’s impractical and often extremely detrimental to spend your time breeding until you arrive at a particular set of genes. The game actively encourages you to push for genetic diversity via an immunity trait that makes an animal prone to illness if its parents have the same type of gene. Because all of the animals are able to interact with their environment in similar ways, those with limited lifespans, infertility, and disabilities are still extremely valuable even if they don’t breed. The game is played as a population, not as an individual creature, and this gives you a deep insight into the value of genetic diversity, variation, and inclusion within your group of critters. It does all of this, not through narrative, or manipulation, but through science, creativity, compassion, math, and play.

We need more of that these days.