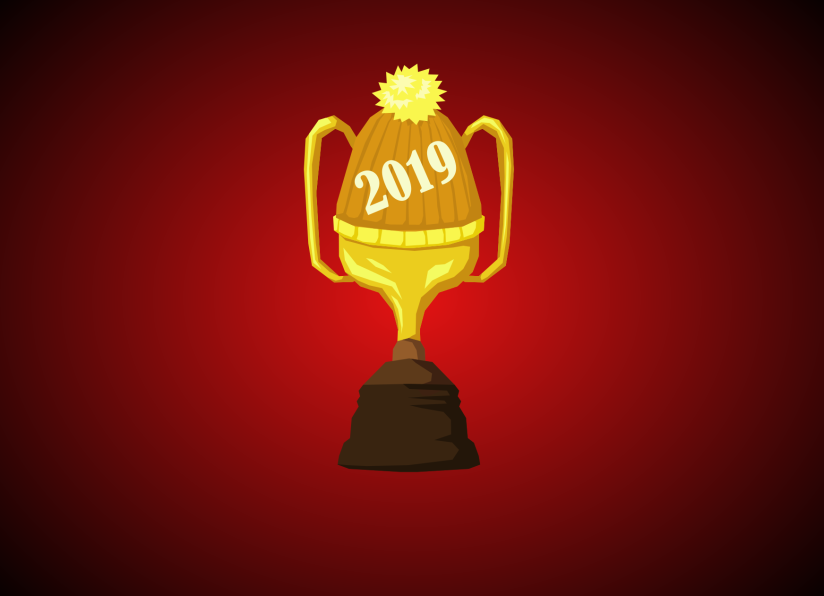 I might as well jump on the retrospective bandwagon and start up an annual (fingers crossed) awards series.

Now, my first instinct was to opt for the best releases of the year, but while I’ve done plenty of catching up on shows I’ve been watching (for the most part), I tend to be actively bad at watching, playing, or reading things right at release. So when I find something spectacular, chances are it’s a year or two old at least.

Around May, I started writing down every new published narrative I came across, regardless of when it came out. I would highly recommend doing this, because it gives you a good perspective on how you spend your time and fosters a false sense of accomplishment. It also makes it easier to recall things you would like to revisit. One thing I’ve noticed ever since starting this blog is that I’ve begun to find enticing narrative pieces far more often than is normal for me. It used to be the case that I would find one or two shows, games, books, or films in a year that speak to me on a personal level.

This year I found thirty.

They’re all lovely, and I’d love to give them each reviews, but I know that’s unlikely to happen for various reasons, so in no particular order, here are some of the beautiful narratives I’ve discovered this year and why they’re worth celebrating.

Spider-Man: Into the Spider-Verse (film)

For its stunning colors and comic book-inspired shading techniques. This film is a masterpiece of composition, with so much put into its art it makes my brain hurt just contemplating the amount of work involved. The story’s not half-bad either.

For surprising me with a genuinely new story. I’m bending the rules a bit here since this is based on real people’s lives and I mostly deal in fiction, but the plot is too good to pass up. A boy grows up in Chicago with his blind father, who lost his vision in a hunting accident. Years later, the boy is risking prison for robbery, and his father reveals he himself went to prison for a similar crime. From there, the story unveils a beautifully-illustrated tale about depression, disability, poetry, family, stories, and two of the most famous American murderers of the 20th century.

For that plane. I’ll be honest, I’m not even finished with this game yet, but I adore the melancholy of it. It’s like a horror game, but for people who like sad things. The art and writing is eerie, but as you explore the game’s world, it quickly becomes apparent that there isn’t really anything out to harm you in it. The linear gameplay affords choice only at intervals that don’t really matter, and it makes this lack of meaningful choice obvious. Yet, I think that’s what I like most about the game. By removing the significance of choices but providing them to the audience all the same, the game gives you something small and special. It allows you to express, to roleplay, to be curious, knowing that there are no wrong choices, but you still must choose.

For fantasy geology, a concept I was born to love. The first in N.K. Jemesin’s Broken Earth Series, The Fifth Season is one of the most surprising and rewarding fantasy novels I’ve ever come across. It tells the story of three figures, magic-users feared by society for their ability to control the earth itself, each of whom is pulled along on their own grim quests on the eve of a great cataclysm. The worldbuilding and magic system are solid, but it’s the narrative’s direction that makes this book so gripping. It’s far more self-aware than one would expect from the genre, using its fiction to comment on how our fantasy conventions interact with our less fantastical history. The book has more than twists and drama to sustain itself, but if that’s the sort of thing you love, it won’t disappoint in that department either.

The End of the Fucking World (show)

For taking a minimalist 170-page graphic novel about a child psychopath and making it look amazing. This is a difficult book to adapt; its premise is strange, its story stranger, and while a lot happens in those 170-some pages, half or more of the story is entirely told in subtext. The show takes its own spin on things, replacing what I believe is Texas with the English countryside, and greatly fleshing out scenes and characters from the book. Both entities exist as their own story, and although their differences are summarily minor, the show’s direction in adaptation easily provides enough distinction that both versions of the story are worth checking out. Granted, I have not yet seen the second season, but the first is worth the award on its own.

This game is worth playing for that goo monster animation alone, but it’s also a heartwarming little platformer that makes me stop regularly to grab screenshots. Seriously, I’m drowning in images for this game. Please help.

To Kill a Mockingbird (novel)

For living up to the hype. I’m not sure how, but I never read this in school. My attempt to get caught up with classic literature has occasionally led me down some strange or underwhelming paths, and more than a few books from what Overdue appropriately calls the “Dead White Male Canon” do not hold up particularly well to scrutiny. I won’t pretend that To Kill a Mockingbird entirely escapes its legacy of being a book about southern race relations written by and from the perspective of a white woman, and its legacy is unfortunately going to be tied to Go Set a Watchman hereafter. But its message is still resonant, and if there’s going to be a book almost every child has to read in school, this story about empathy and being moral in a world that often isn’t is a fine book to pick.

For Josh and his adorably frustrating personality. Please Like Me is an Australian dramedy starring a young gay man who has just discovered he likes guys. The seasons are short but hit hard, blending quasi-cringe comedy with heartfelt sincerity. I’m not normally one for this sort of series, but it has an excellent understanding of its characters and razor sharp writing. More people need to know about it.

Honestly, all of the characters in this show are spectacular. Stevie is neither gay nor more than one person, but she deserves this award all on her own. But this award is mainly for Patrick and David, for making me cry six times.

For Swearengen, whose real-life counterpart was practically christened for this character. I’ve been excessively late to the party on this one, and no, I have not seen the movie, but for a series that predates the rise of prestige television by a few years, this one certainly doesn’t disappoint. I don’t know that I can say much that other people haven’t; it’s surprisingly funny, it’s well-paced, and it’s a tragedy it was never finished as intended. The cinematography is excellent, and often the only way I can tell any of the fifty men with mustaches apart. And, of course, the writing captures the grime of its historical context with such prosaic dialogue that it would impress Shakespeare. The obscenities in particular.

For Clair, the pencil, because we’ve all had days like that. You’ve heard of this one, but its acclaim is well-earned. I love the pacing, I love the characters, and I love the way its scenes are written. The haircut scene absolutely kills me. Its first season is more self-contained, but the second season continues the creative editing and wry sensibility that I think defines the show. I’m not sure it’s quite as deep as it seeks to be, but I have high hopes for future seasons. It only takes a quick minute to watch, so if you have it available, go for it.

I’ll admit, I am not well-versed in the illustrious career of Shia LaBeouf, but even I know to be suspicious when the words “critically-acclaimed Shia LaBeouf vehicle” come about. To be honest, this award does not even go to Shia LaBeouf or his character, but to Zak and by extension his actor, Zach Gottsagen. The film is Huck Finn by way of a man with Down syndrome who escapes the nursing home where he lives to become a pro wrestler with the help of a crab thief. It’s a delightful and often whimsical film that stops short of being saccharine, much of its drama tied up in the contrast between the protagonist’s sincerity and his self-awareness. The other major players in the story, notably the crab thief and Zak’s caretaker, have interesting roles in relationship to him, and they, like many people in the story, have difficulty judging what he’s capable of, especially because of his disability. It’s a lovely little character study, and its plot is effectively structured as well. The film doesn’t hit every target right on the mark, but it was a pleasant surprise and not the sort of thing I see often enough.

For Waddles. This is the most recent addition to this list, and I’m really happy I got to it before the end of the year, because even though it’s several years old by now, it deserves recognition. It’s just a really good show, kid-friendly or otherwise. Mabel is Best Char, an utter ray of wobbly sunshine whenever she’s on screen, and weird in exactly the way I like. It has a charming sense of humor, a pleasant art style, and surprisingly robust writing for all of its cliches. By the end of the series, most of my complaints about earlier episodes had resolved, and I didn’t really have that many to begin with. Parts of it already haven’t aged well, but the show as a whole overcomes these in its sincere and heartwarming tale, which is genuinely engaging through every episode. Its premise will give you a good idea if you’ll like it — two kids stuck living in their great-uncle’s tourist trap for the summer, investigating paranormal monsters around the town. I frankly adore it, and many of the jokes had me in tears.

Sorcerer to the Crown (novel)

I still haven’t finished it even once, but any Lovecraftian-styled game that has me negotiating with people to build a monument to carrots is a good one in my book. Even if that never seems like the correct option.

For all seven of the main characters, but let’s be honest, it’s mostly for Klaus.

For its very good (if angry) squid.

For its lovingly-described pet grasshoppers and wasp.

For having the only Wallace I encountered in a story this year, but an excellent one nonetheless.

And, because I’ve joked about giving this award before and there are a lot of terrible fathers in fiction, this year’s Worst Dad award goes to:

For Crowley, Aziraphale, and Satan, who concoct a plan to raise the Antichrist, immediately lose him, raise the wrong kid for ten years, abandon that kid entirely, and try to kill the other one. Good job making mediocre fathers everywhere look better by comparison.

Finally, the coveted Golden Hat, awarded to the fictional character with the absolute best hat of the year:

The Dog in Kentucky Route Zero